Newborn babies sleep from 11 to 16 hours a day, at all hours of the day and night. Your baby's sleep patterns may be unpredictable for a while, and there's no need to put him on a sleep schedule just yet, though there are some things you can do to encourage good sleep habits. 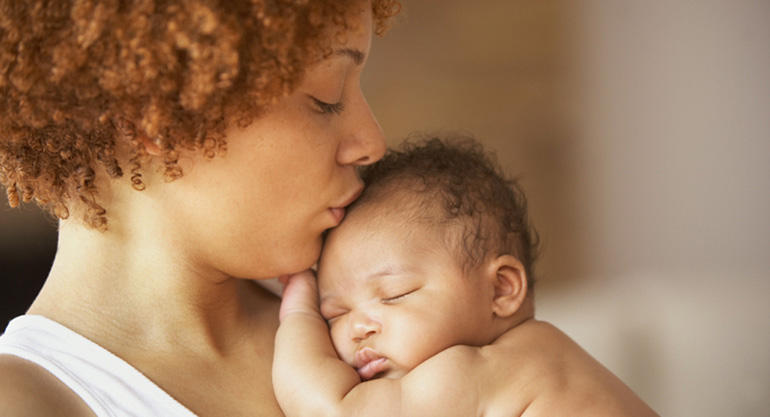 Photo credit: Veer
IN THIS ARTICLE

Newborns sleep an average of 11 to 16 hours a day (even this young, babies are individuals). However, they may sleep for only one or two hours at a time.

During the first three months, your baby will begin to sleep for longer periods at a time, but most infants don't sleep for more than a 4- to 6-hour stretch, day or night.

Why are my newborn baby's sleep patterns so unpredictable?

It's normal for babies to have irregular sleep patterns from birth to 3 months. Newborns haven't yet developed their circadian rhythm. Also known as a sleep/wake cycle, a circadian rhythm is an internal 24-hour clock that cycles at regular times between sleepiness and alertness.

Unpredictable sleep patterns are also due to nutritional needs. Your baby may need to eat every two to three hours in the first month and every three to four hours in the second month. As she gets older, she won't need to be fed at night as often.

Fortunately, these unpredictable patterns don't last long - though it may seem like an eternity when you're sleep deprived. Some babies consistently sleep for longer stretches by 3 or 4 months. Others don't until they're older.

Will my baby's sleep patterns during pregnancy continue after birth?

You've probably heard that if your baby is most active in the womb at night, he'll be a night owl once he's born. Some moms - as well as a few sleep experts - swear this old wives' tale is true, but no scientific evidence bears it out.

It's true that your baby is developing a sleep/wake cycle before he's born. At the beginning of your third trimester, he'll start having active or REM (rapid-eye-movement) sleep, the phase of sleep in which we dream. He'll add non-REM sleep - also known as quiet sleep - a month or so later.

Does my newborn baby know the difference between night and day?

Not at first. Until your baby is about 1 month old, the amount of sleep he gets during the night will roughly equal the amount he gets during the day. At anywhere from 6 weeks to 3 months, his core body temperature and melatonin (a hormone that helps regulate the sleep cycle) will help him start to develop a sleep/wake cycle that differentiates night from day.

Are newborn baby sleep cycles different than those of adults?

Yes. Babies' sleep cycles are far shorter than those of adults. Sleeping newborns spend about half of the time in REM sleep. In contrast, older children and adults spend much less time in REM sleep than non-REM sleep. It's thought that newborns have more REM sleep because it's necessary for the extraordinary development that's happening in their brain.

The newborn equivalent of REM sleep is called "active sleep" because your baby's eyes will usually move beneath her eyelids, and her arms and legs may twitch or jerk. She'll then transition to quiet sleep, similar to non-REM sleep, in which her twitching will stop, her breathing will become deeper, and it might be more difficult to wake her. Your baby may transition between REM and non-REM sleep several times during just one sleep cycle.

Should I put my newborn baby on a sleep schedule?

No, especially not in the first weeks. It's normal for your newborn baby to have an irregular sleep pattern. Part of that comes from the need to eat frequently and sleep a lot.

Still, you can start to follow a schedule of sorts over those first months by establishing consistent bedtime and nap time routines. As your baby starts to sort out his sleep rhythms, having these routines in place and introducing good sleep habits (see below) can help him more easily settle into a schedule as he gets older. Getting outside into daylight, especially in the morning, will also help your newborn start to get on a more predictable schedule.

Should I wake up my newborn to feed him?

Generally not after the first couple of weeks or so. Ask your baby's doctor when it's necessary to wake your baby and when it's okay to start letting him sleep for long stretches without eating.

It will depend on how your baby is feeding and growing, especially until he gains back the weight he lost right after birth. (Most babies lose weight in the first days after birth and gain it back by the time they're about 2 weeks old.) Your baby’s doctor may recommend waking your baby every few hours until your baby is back to his birth weight.

If your baby is steadily growing and gaining beyond his birth weight, nursing or bottle feeding well, and having plenty of wet and poopy diapers for his age, then your pediatrician may say it's fine to let him sleep for long stretches - even 8 or more hours at a time, if he's inclined to. (Most young babies will wake up hungry well before this!)

Is it possible to teach my newborn baby good sleep habits?

Here are healthy sleep habits you can start to introduce.

Give your baby a chance to nap frequently. For the first six to eight weeks, most babies aren't able to stay up much longer than two hours at a time. If you wait longer than that to put your baby down, he may be overtired and have trouble falling asleep.

Teach your baby the difference between day and night. Some infants are night owls and will be wide awake just when you want to hit the hay, and others may be early birds. For the first weeks, you won't be able to do much about this. But once your baby is about 2 weeks old, you can start teaching her to distinguish night from day.

During the day, when she's alert and awake, you can:

At night, you can try the following to help your baby begin to figure out that nighttime is for sleeping:

Learn your baby's tired signals. You'll soon develop a sixth sense about your baby's daily rhythms and patterns, and you'll know instinctively when he's ready for a nap or an early bedtime. But if you spot these or any other signs of sleepiness, try putting him down as soon as possible. If he becomes overtired, it can be harder for him to settle down and sleep.

Put your baby to bed when he's sleepy but awake. By the time he's 6 to 8 weeks old, you can try giving him a chance to fall asleep on his own by putting him in his crib or bassinet when he's sleepy but still awake. This doesn't work with all young babies, though. You can always try again when he's a little older.

You might also put your baby in his crib or bassinet sometimes during the day when he's happy and wide awake. This will help him develop positive associations with it.

Expect some trial and error while you figure out what's the best approach with your little one. For example, you might put your baby down, read a book, and pat her for a few minutes before leaving her on her own.

Some sleep experts advise against rocking or nursing your baby to sleep, even at this young age. Not everyone agrees with this strategy, however, so do what works for your family.

When will my baby start to sleep through the night?

It depends on your baby. Usually by 6 months, most - but not all - babies are capable of sleeping for 8 to 12 hours, with brief awakenings but no feedings, during the night. But that doesn't mean your baby will. Some infants sleep for stretches of up to eight hours at night as early as a few weeks old, but many won't sleep this long until they're older.

Even if she's not sleeping through the night, your baby's sleep patterns will probably be more predictable after a few months. Read about putting her on a sleep schedule and tips for helping her fall asleep on her own in our article Baby sleep basics: 3 to 6 months.

BabyCenter's editorial team is committed to providing the most helpful and trustworthy pregnancy and parenting information in the world. When creating and updating content, we rely on credible sources: respected health organizations, professional groups of doctors and other experts, and published studies in peer-reviewed journals. We believe you should always know the source of the information you're seeing. Learn more about our editorial and medical review policies.

AAP. 2018. Getting your baby to sleep. American Academy of Pediatrics. https://www.healthychildren.org/English/ages-stages/baby/sleep/Pages/Getting-Your-Baby-to-Sleep.aspx [Accessed January 2021]

NSF. 2020. How your baby's sleep cycle differs from your own. National Sleep Foundation. https://www.sleepfoundation.org/baby-sleep/baby-sleep-cycle [Accessed January 2021]

Show more
Karen Miles
Karen Miles is a writer and an expert on pregnancy and parenting who has contributed to BabyCenter for more than 20 years. She's passionate about bringing up-to-date, useful information to parents so they can make good decisions for their families. Her favorite gig of all is being "Mama Karen" to four grown children and "Nana" to seven grandkids.
advertisement | page continues below
advertisement
Featured video

Baby sleep basics: 3 to 6 months
By Karisa Ding
How do I teach my baby to soothe herself to sleep?
By Janet Ozzard
My baby is up all night and sleeps all day. How can I get him to switch his schedule?
By Deborah Lin-Dyken, M.D.
Swaddling your baby
By Nancy Montgomery
Free Stuff & Great Deals
Sleep regression in babies and toddlers
By Claudia Boyd-Barrett
Sample baby schedules for 1- and 2-month-olds
By Maureen Connolly
How much sleep do babies and toddlers need?
By Karisa Ding
Get the BabyCenter app
The #1 app for tracking pregnancy and baby growth.
Download now